Workplace Leadership at the Heart of a Respectful Workplace

Previous Next
Workplace Leadership at the Heart of a Respectful Workplace 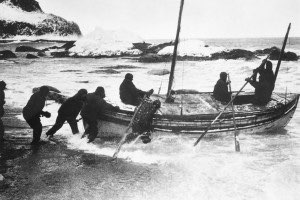 I believe that strong and ethical leadership is at the heart of respectful workplaces.
Effective leadership is not about finding  a soapbox, standing upon it, and preaching to those around you like a Sunday morning hack at Speaker’s Corner in London’s Hyde Park.
No, the sort of leadership I am talking about is where you assume accountability to your employees, and set an example of respect through your actions.
There are also moments when you need to point out the obvious to everyone regarding why it is so important to treat each other appropriately.
Depending on the level of trust you have within the workplace as a leader, this will either fall on completely deaf ears, or will be remembered forever by those present.
I have an example of the latter for you.

Sir Ernest Shackleton is best known as a heroic explorer.
He is also widely acknowledged as an incredible leader, who was decades ahead of his time. He was responsible for saving the lives of the twenty-seven men stranded with him in the Antarctic for almost two years in the early part of the last century.
Many stories have been written about the Imperial Trans-Antarctic Expedition (1914-1916), in which Shackleton intended to sail from England, and cross the continent of Antarctica from one coast to the other, passing right over the South Pole on his way through.
At some point within this epic journey, his ship, Endurance, was crushed in sea-ice. It sank, and the entire group found themselves on a remote island.
Shackleton was about to take one of the three life-boats along with five of his crew, and row over 800 miles across the southern Atlantic Ocean to find help. The remainder of the crew (twenty-two men) were to remain on a beach living under the two remaining life-boats, and wait for Shackleton to return with the ‘help’ that he promised.
Prior to pushing the life-boat out into the surf to begin his 800 mile row, Shackleton sat down with his entire crew. He told them that how they treated each other from this point forward was going to determine whether they lived or died.
It was as simple as that.
Whether they were camping under the two life-boats on the beach, or if they were in the other life-boat rowing for help, they had to make sure they did three things:

Over the course of the expedition, Shackleton had many serious conversations with his crew. However, it was this one particular talk on the beach, prior to that last life-boat launch, which was remembered in the numerous memoirs and journals written by each crew member. All of whom survived to talk about it.
There are times when, as a leader, you may feel that something is so obvious (or should be so obvious) that there is no need to point it out to people.
However, when you do take the time to point it out, and remind people why treating each other respectfully is so important, those who hear it will not only remember it, but will act on it too.
Shackleton’s three points have as much relevancy in our modern-day workplaces, as they did to those men sitting on a frozen beach at the bottom of the world.