The Andrea Adams Trust and Bill 14

Previous Next
The Andrea Adams Trust and Bill 14

There are heroes behind Bill 14 – but their work is still not complete.

In my previous article on Bill 14, I outlined the massive significance of Bill 14 in the world of British Columbia’s workplaces. I also mentioned that its history (in my expert opinion) could be traced all the way back to the dedicated work of The Andrea Adams Trust.
I had the pleasure of visiting the office’s of the  Andrea Adams Trust when they were located in Brighton in the UK, a few years ago. It was an inconspicuous set of small offices, located on the second floor of a terrace-style building which was once residential, but had now been converted into work spaces.
Looking back at my brief time there, I now wish that I had spent longer talking to the principles behind this incredible movement that acted as the catalyst for the creation in 2001 of the UK’s Dignity at Work.
The Andrea Adams Trust sported a unique ‘logo,’ which played on the familiar school yard chant, commonplace at one time: “Sticks and Stones will break my bones but words can never hurt me.”

The Trust twisted the last piece to represent the problem they were tackling through their work.

The Andrea Adams Trust was set up in 1996 to further the pioneering work of the late Andrea Adams, who brought the issue of workplace bullying to public attention for the first time in the early 1990s.
Andrea Adams was a broadcaster and journalist, and was the first person to recognize the significance of workplace bullying. Her book entitled “Bully at Work,” published by Virago in 1992, remains a landmark in this field. 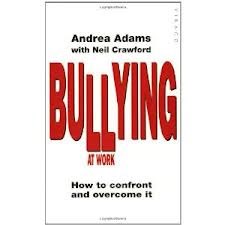 Andrea’s tragic death in 1995 left a legacy of many people affected by her personality, and her work. I never met or knew Andrea, but I know that the people she touched felt strongly that her contribution must not be forgotten, and that the work she started, must be continued.
How do I know this you ask? Because when I visited the Andrea Adams Trust offices that sunny August day, you could feel the focus and strength in the staff working in the office. There was no mistaking…they were on a mission.
The Trust was the world’s first non-political, not for profit charity, operating as a focus for the diverse and complex problems caused by bullying behaviour in the workplace.

“Workplace bullying constitutes offensive discrimination through vindictive, malicious, cruel or humiliating attempts to undermine an individual or a group of employees.
These persistent negative attacks on their personal performance are typically unpredictable, irrational and often unseen.
This abuse of power or position can cause such chronic stress and anxiety that the employee gradually loses belief in themselves, suffering physical ill health and mental distress as a direct result.”

Just reading this should leave you with the distinct impression that the Trust is about action. There is no sugar-coating going on here regarding the problem that faces workplaces throughout the world. The problem of workplace bullying.

BC Finally On Board

On July 1,2012, British Columbia finally got some teeth to start tackling the problem, joining Quebec, Ontario and Saskatchewan.
Workplace bullying looks like an elephant when you think about the size of problems that face employees everywhere.
But you know how you eat an elephant don’t you? That’s right…..one bite at a time.