Previous Next
Companies In Canada Legally Responsible for Employee Behavior 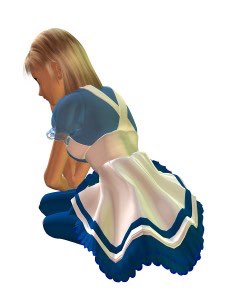 Have you ever heard of Charles Lutwidge Dodgson?
Not many people have…..
Better known as Lewis Carroll, Mr. Dodgson wrote a novel in 1865 called Alice through the Looking Glass. In the story there’s a scene where Alice attends a tea party and meets The March Hare, The Mad Hatter, The White Rabbit, and The Dormouse. Do you remember that?
There is an exchange of words between The March Hare and Alice, and at the end of it we hear The Mad Hatter speak for the first time…when he tells Alice that her hair needed cutting…..…which is actually the very first thing that he said to her in this classic story.
What was Alice’s response to The Mad Hatter?
“You should learn not to make personal remarks, it’s very rude.”
When Alice peeked through the looking glass and arrived in Wonderland, she found the same thing existed there that exists in many workplaces these days. People are rude.
Why don’t folks turn their cell phones off in the meetings they attend? Why do people say good morning to some people, and not to others? Why do some people talk loudly about the personal lives of other people for the entire world to hear?
There have been many studies conducted on these questions. The answers often revolve around the fact that workplaces no longer look like the traditional places they used to be, and the interpersonal infrastructure within organizations has broken down. There are companies that are working hard to reverse this situation, and as a result are making their mark in the world of employee engagement.
But most companies are not doing anything at all. Worse still, the supervisors in those companies, are not doing anything when they see or hear incivility between employees. It’s mostly attributed to: “that’s just the way they are,” or “they didn’t mean anything by what they said,” or “he’s always been like that,” or “she’s probably just having another bad day.” Supervisors and managers tend to turn a blind eye to what is going on. If an employee wanders into their office, shuts the door and starts with, “I want you to do something about Dennis. He’s at it again,” the supervisor is likely to sit and listen to the employee. When the employee has calmed down to the point where they can go back to the workplace, the supervisor will likely make some comment about “having a word with Dennis” to placate the employee but then the entire thing is put aside. Until the next time. And then the next time.
The employee starts to realize that nothing is going to be done. Ever.
Dennis gets away with it again, and the employee begins to look elsewhere for work rather than continuing to push that same rock uphill, having realized that the top of the hill is never going to arrive.

Landmark Decisions In Canada on Harrassment and Employee Behavior

Since the landmark Supreme Court of Canada decision made on July 29th, 1987, in the case of Bonnie Robichaud against Dept of National Defence, employers have always been responsible for the behavior of their employees. Especially the Dennis’ of the world and their supervisors.
An employer can avoid a lot of the difficulties that their employees (and their supervisors) create for them by supporting the development of a more respectful workplace.

Here are 7 critical suggestions that can assist in that development:

So, did Alice have it right?
Within Carroll’s brilliant work, Alice speaks to the Cheshire Cat about her experiences in Wonderland, and about the characters she has met there.
Alice said to the Cat:

“I don’t think they play at all fairly, and they quarrel so dreadfully one can’t hear oneself speak – and they don’t seem to have any rules in particular; at least, if there are, nobody attends to them.”

Leaders of organizations must realize that they are responsible for everything that goes on within their walls. A strong company stand on respect, an advertised and promoted policy, and the role modelling of appropriate behavior throughout the company by employees, supervisors, managers and leaders, are all required if the business is going to protect its employees, as well as defend itself from legal liability.