There aren’t many sure things in this world, but I can say with some certainty that just about everyone has or has had a boss.

In fact, the key ingredient to working in a Respectful Workplace often revolves around how much a boss cares (or doesn’t care) about the people who work there.

I have had many bosses in my life.
First there was Mr. Ross who owned the newspaper shop down the street from the house I grew up in. That job was your typical delivery service, cycling around the neighbourhood at some unworldly hour, and on Sundays trying to throw a newspaper that was the weight of half a tree. Speed was everything to Mr. Ross and I was never fast enough to escape his yelling. His ranting was definitely intimidating and I felt bullied and harassed. Needless to say, I didn’t stay long.
Next there was Mr. Smith who owned the fish and chip restaurant where I got my second job. Looking back on it, he provided me with a complete lack of training for a job where I needed to use a dangerous and antiquated potato peeling machine and then have my hands exposed to boiling vats of oil. He didn’t bully or harass me— he just didn’t seem to care at all!
After that, I went to work in a greenhouse nurturing cactus plants destined for gardening centres all over England. Mrs. O’Leary was a fantastic boss. She not only spent a great deal of time with each new employee and made sure we were safe working with our prickly “co-workers,” but she also made sure we were all able to get to and from work since the greenhouse was nowhere near a bus route. It was a great atmosphere, primarily because I was working for someone who genuinely seemed to appreciate me (and my coworkers) being there.
Then I made the jump onto the train to head up to London to become a police officer. In my career with the Metropolitan Police, and then as an officer in Canada, I experienced all sorts of bosses— just as you have.
There are those bosses who, just by their presence, put a skip in your step and make you feel that you can accomplish anything!
Then there are those who say and do things to drag you down emotionally and make you feel like you’re carrying around an anchor.
Just as I can say with certainty that we’ve all had bosses, I can also say with certainty that you’ve most likely had both types at some point in your life. I’m sure you can even remember the behaviours of both your best and worst bosses so clearly that it feels as if they are right in front of you…

In our SONAR Leadership workshop (where we focus strictly on the positive behaviours demonstrated by supervisors, managers, and leaders in respectful environments), we run an exercise in which we invite participants to highlight those behaviours of their bosses who exist at both ends of the spectrum.

In the exercise, we ask every participant to write down a word or short phrase on three small recipe cards to describe both their best and worst manager’s behaviours. It’s very clear by how enthusiastically the workshop participants complete this, that we all remember the impact of our best and worst bosses extremely well.
The results, which are then posted onto the walls on both sides of the workshop room, quickly take on the role of a guidebook as to the types of behaviours which an individual should or shouldn’t adopt.
One side of the room are characteristics to adhere to if they want to have a positive impact on those around them. And conversely, on the other side of the room the wall is full of recipe cards depicting behaviours that are guaranteed to create distance, disengagement, and all things negative.
Below I have synthesized some of the responses from the “BEST behaviours” of this exercise from our last several SONAR Leadership workshops.
Next time, I will share the WORST behaviours. Those are the workplaces where bullying and harassment is often routinely experienced, and sometimes as a direct result of the boss.
I hope you find this useful!

THINGS THAT MY BEST MANAGER / LEADER DID 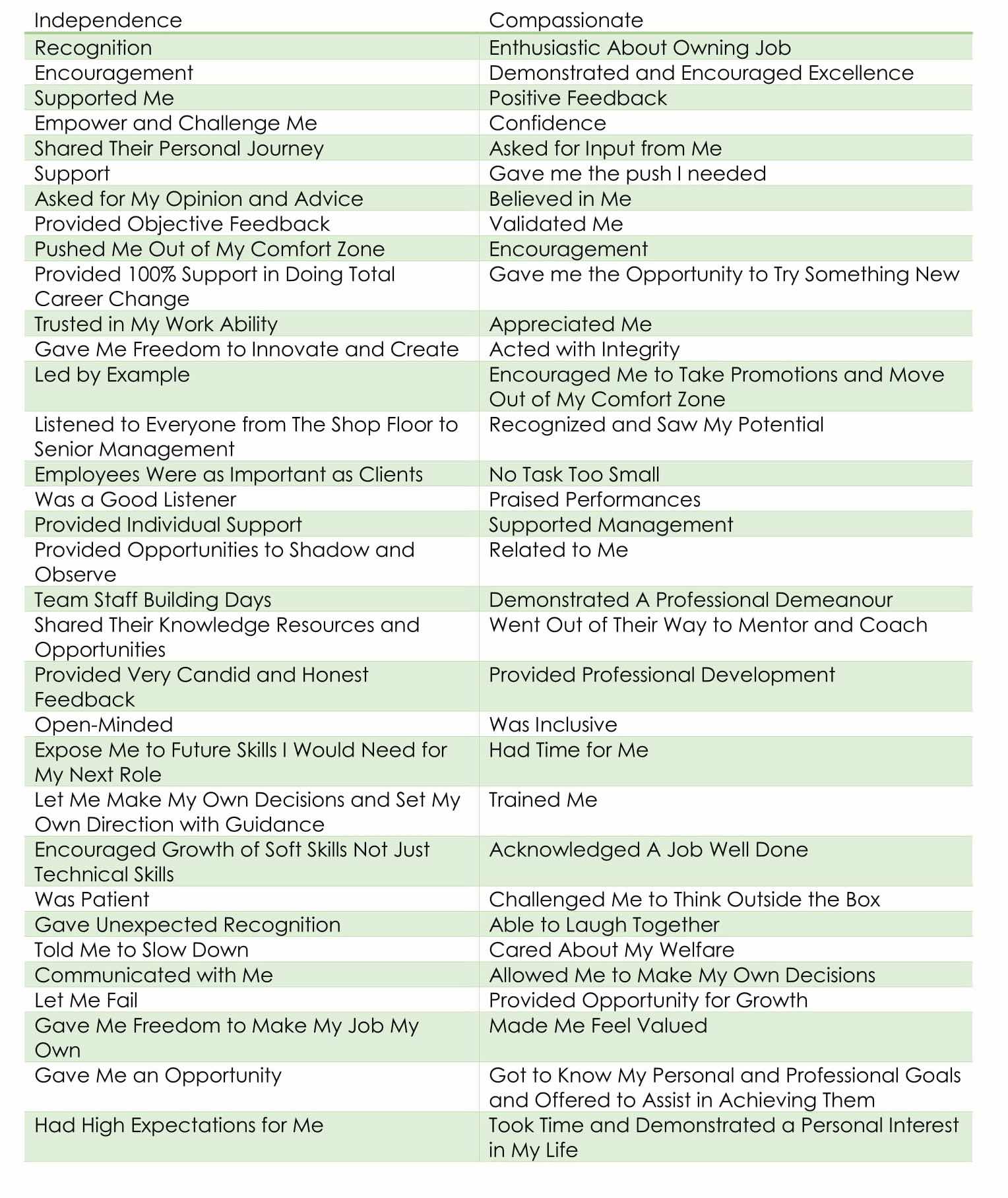