Previous Next
Workplace Safety For Flaggers: Myth or Reality? 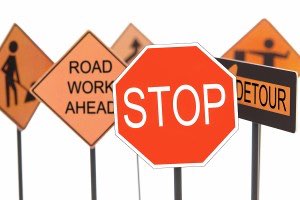 Can you ever be safe when you stand in traffic for a living?
Workplace Safety Prevails: On Friday, 16th March 2012, Michael Biemans was found GUILTY in British Columbia Provincial Court in New Westminster of assaulting flagger Paul White. He assaulted Mr. White with a weapon. What was the weapon? Answer: His work truck. WorkSafe BC’s Occupational Health and Safety Regulations, Part 18, deals with Traffic Control and emphasises the need for caution. Under Part 18.8 (Location of traffic control persons).  It states:
A traffic control person must (a) stand in a safe position, preferably on the driver’s side of the lane under the TCP’s control, be clearly visible, and have an unobstructed view of approaching traffic.
There is plenty of other legislation out there that focuses  on employers doing everything they can to ensure workplace safety for their  staff when they go to work. In general, incidents that involve vehicles and humans on  public roads have been treated as Motor Vehicle accidents and NOT as criminal  acts.
The Criminal  Code of Canada’s definition under Section 267(1) states that:
“Everyone who, in committing an  assault, (a) carries, uses or threatens to use a weapon or an imitation thereof, or (b) causes bodily harm to the complainant, is guilty of an  indictable offence and liable to imprisonment for a term not exceeding ten  years or an offence punishable on summary conviction and liable to imprisonment  for a term not exceeding eighteen months.”
Section 2 of the Criminal Code defines a “Weapon” as:
Anything used, designed to be used or intended for use (a) in causing death or injury to any person, or (b) for the purpose of threatening or intimidating any person.
Three distinct categories in one short sentence buried deep in the depths of the small print of Section 2.
As Mr. Biemans found out, this includes his work truck.
The Gross Vehicle Weight of today’s average pick-up truck in over 8,000 lbs.  Use that fact when considering workplace safety and what the average Flagger might look like if they received a direct hit while working. Not a pretty sight…..and more than likely DEAD. Mr. White, fortunately, was not injured (according to the reports) but you don’t have to be injured in order to be a victim of a criminal assault. No more will drivers be able to assume they’re immune from being held totally accountable for their actions when they are behind the wheel of their vehicle. The message is clear.
No more 8,000 lbs weapons.
The law prevailed on March 16th and has seen fit to make a statement about the importance of workplace safety and protecting workers as well as the responsibility that every driver has. Thank goodness. There may be legislation out there, but it doesn’t do any good if it’s not supported!
Phil Eastwood
Phil Eastwood2018-08-31T11:57:58-07:00