White Ribbons and the Campaign to End Violence Against Women

STOP THE VIOLENCE AGAINST WOMEN

A little history for those of you whom don’t remember this.
On the afternoon of December 6th, 1989, a man walked into the École Polytechnique University in Montreal and massacred 14 of his female classmates. His actions traumatized a nation and brought the issue of violence against women to the forefront of our collective consciousness.
Two years later, a handful of men in Toronto decided they had a responsibility to speak out about and work to stop men’s violence against women. As a result, the White Ribbon Campaign in Canada became an annual awareness-raising event, held between November 25th and December 6th.
In 1999, the United Nations General Assembly declared November 25th as the International Day for the Elimination of Violence against Women, with a white ribbon as its iconic symbol.
So each year, people in 60 countries around the world take part in events to bring increased awareness to the issue of male violence against women.
From it’s very core, the White Ribbon Campaign has now grown to be the world’s largest movement of men and boys working to end violence against women and girls, promote gender equity, healthy relationships and a new vision of masculinity.
From its inception, men were asked to wear white ribbons as a visible sign of their pledge to never commit, condone or remain silent about violence against women and girls.
The work of the White Ribbon movement is to examine the root causes of gender-based violence and create a cultural shift that helps bring a future without violence.
Through education, awareness-raising, outreach, technical assistance, capacity building, partnerships and creative campaigns, White Ribbon is helping create tools, strategies and models that challenge negative, outdated concepts of manhood and inspire men to understand and embrace the incredible potential they have to be a part of positive change. 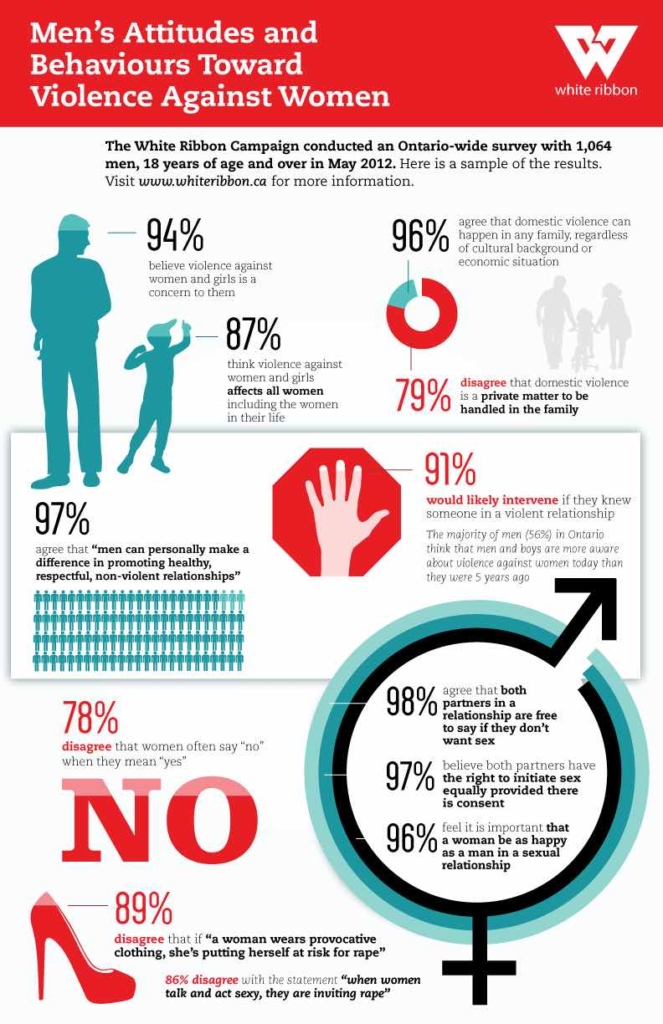 Some of the campaigns that have been (and continue to be) the initiative of the White Ribbon movement are: “It starts with you” “Walk a mile in her shoes” “Draw the line” “The mask you live in” and ”What makes a man.”
The White Ribbon Campaign conducted a survey on men’s attitudes and behaviours towards violence against women in May 2012.
The survey consisted of a telephone poll conducted by Leger Marketing, with a random sample of 1,064 men, 18 years of age and over.
Some highlights from the survey are in the infographic that we have included in this article.
There were definitely some significant areas for improvement revealed from the survey, which is why the White Ribbon Campaign continues on its mission.
Those areas were these:

Under the title “What can you do?” on the White Ribbon website it states this:
One of the most important things you can do to help promote gender equity, healthy relationships, positive ideals of masculinity, and help end gender-based violence is to speak out against it.
And….make sure you wear a White Ribbon.