Previous Next
The Heinrich Accident Pyramid Connects to Workplace Violence

The Heinrich Accident Pyramid and Its Relationship to Bullying & Workplace Violence 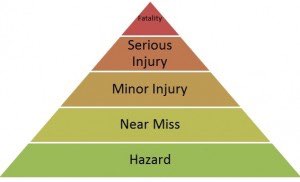 This graph is an outline of the Heinrich Accident Pyramid and focuses on workplace accident statistics. It suggests that that there is proportionality between the numbers of hazards in the workplace, to the number of fatalities.
We use this in our workplace safety training seminars to demonstrate that if you work on reducing the number of hazards and near miss incidents in the workplace, (the base of the pyramid) then by proportion you will reduce the number of serious injury and fatalities as well.
Could there be a similar relationship between incivility, bullying, and more overt forms of disruptive relationships, such as aggression and violence? Perhaps another pyramid could be drawn?

Without knowing the numbers of incivility and bullying in workplaces, it would be hard to say with any degree of credibility or certainty, but then again, if we use Heinrich’s philosophy, the exact numbers of hazards and near misses are not known either. It is merely a representation of what is widely held to be the relationship between the base of the pyramid and the top.
If organizations make a concerted effort to eliminate (or reduce) the instances of incivility within their workplaces, it would follow that the amount of bullying, harassment and more overt behaviour would also drop.
Visually it would make sense……as the base of the pyramid is reduced, so is the height of the pyramid. The result would be a healthier and safer workplace.
There is an old saying that if you “take care of the little things, then the bigger things will take care of themselves.”
By ensuring a strong corporate tone of respect and politeness in the workplace, (which is more than a policy statement, it is a culture and atmosphere you can FEEL), the amount of disrespectful behaviour and other problematic acts such as bullying, harassment, and workplace violence, will be greatly reduced and hopefully, even eliminated.