The Courage to Apologize

Previous Next
The Courage to Apologize

To err is human: It is how we handle it that makes the difference!

I have been thinking a lot recently about the issue of apologies.  It takes courage to apologize.
In the world of workplace bullying and harassment as well as other negative interpersonal situations, a great deal of emphasis is placed on the issue of trying to informally resolve things sooner rather than later.
The longer we leave damaged relational issues unresolved, the higher the likelihood is that we’re going to develop more entrenched opinions about the other person and/or the situation itself.
Also, there will be an increased risk that the negativity will spread to other parts of the workplace as the individuals involved establish camps with other employees and divisions start to appear elsewhere.
Then, before you know it, a nightmare has emerged over an issue that perhaps was a simple misunderstanding between two people who could not bring themselves (or perhaps were unwilling) to sit down and talk about it.
Sound familiar?
Of course, if we’re talking about apologizing it generally indicates that someone has acknowledged that they have made a mistake at some point.
There are times when someone may realize they made a mistake. They either feel that it was so insignificant they don’t need to apologize or is embarrassed about the situation. Then, they can’t bring themselves to apologize despite knowing that it’s the right thing to do.
So, with the other person expecting an apology to occur, and the longer that it doesn’t appear, the more chance there is of that nightmare becoming a reality.

As Bruce Lee once said:

So there is courage involved in apologizing to someone. When a person admits they did something that was wrong, it puts them in a vulnerable position, which they may feel can open them up to attack or blame. Many people struggle to show this courage.

What actually is an apology? 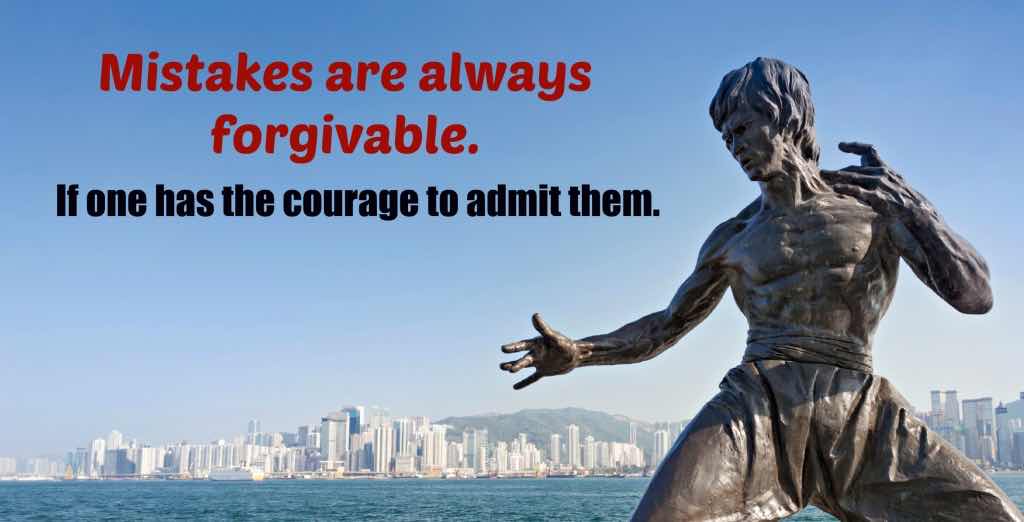 An apology is a statement that contains two distinct elements:

We know that it isn’t always easy to apologize, but it is absolutely the most effective way to restore trust and balance in a relationship when someone has done something wrong which has damaged that relationship.
Let’s look at a recent example of an apology and you make your mind up as to the whether the damage to the relationship caused by the incident has been repaired by the apology.
This example is from August 7th 2015 when CBC reporter Megan Batchelor was kissed by a passing youth as she was broadcasting live from the Squamish Valley Music Festival in British Columbia.
Shown live on television, the act caused a huge stir. Later on in the weekend, the 17 year old youth who was identified in a CBC article as Daniel Davies, reached out to Batchelor on Twitter, identified himself and said he regrets his actions.
Having read and watched the CBC report from these links, I hope that like me you recognize that apologies do take courage (as Bruce Lee told us they do) but the results are incredibly worthwhile.
So please, understand and acknowledge that:

But when we act courageously and own those mistakes that we have made and apologize…REALLY apologize…to those whom we have hurt or offended….we can repair that damage completely.
All it takes is COURAGE!