Lack of Leadership in the Workplace Costs Big Bucks 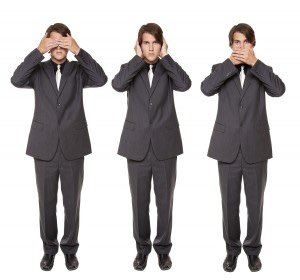 In our workshops dealing with Respectful Conduct in the Workplace, we stress the importance of appropriate leadership. We use many examples from the world of business to illustrate how organizations, with engaged leaders, foster cultures of respect and dignity.
One of the expectations of employees, who suffer with what they feel to be bullying or harassing behaviour from another worker, is that when they speak up about their experience, their voice will be heard.
In most workplaces, the procedure identified within most policies, is to talk with the person or persons whom the employee is having conflict, in order to resolve their issues. Many times, issues arise out of simple misunderstandings, or perhaps the person was not aware of the impact their behaviour was having on the other person.
If the employee is not comfortable in having that difficult conversation, or perhaps the situation is so serious that resolving it in this manner would not be appropriate, then the next step would be talk to the their supervisor, manager or a Human Resources professional.
However, when that step is taken by the employee, and the person to whom they bring their concerns does not respond appropriately, trouble will lie ahead for the organization.

Respectful Conduct – Why Listening, But Not HEARING, Can Cost $300,000

Take the case of an Australian bookstore, Legibooks, who has been ordered to pay $300,000 in damages after failing to adequately respond to bullying complaints from an employee over a five-year period.
Wendy Swan commenced employment at Legibooks in August 2002. Mr. Cowell was her manager. In March 2003, Ms Swan expressed concerns to the Board of Directors of Legibooks about his behaviour. She told the Board that she felt humiliated, intimidated, and threatened by Mr. Cowell’s behaviour, who had demonstrated violent behaviour towards her, and had also threatened to dismiss her.
The Board decided to develop policies and procedures with respect to conduct in the workplace. In its meetings, the Board acknowledged that it had legal and moral obligations to provide a safe workplace, and that Mr Cowell’s conduct could have an impact on Ms. Swan’s health.
Ms. Swan expressed satisfaction with the Board’s response and decided not to make a formal complaint. However, the Board did not follow through with its decision.
Meanwhile, Mr. Cowell’s bullying behaviour continued, and in July 2007, Ms. Swan suffered a breakdown.
Six years and a court case later, the result was $300,000.  You can read more about it here

The three wise monkeys are a pictorial maxim. Together they embody the proverbial principle to “see no evil, hear no evil, speak no evil.”
There are various meanings ascribed to the monkeys, but in the Western world, the phrase is often used to refer to those who deal with impropriety by turning a blind eye.
It’s important that if someone tells you something about what they are experiencing within the workplace…don’t become a wise monkey!
It’s not smart….