You should only laugh at yourself 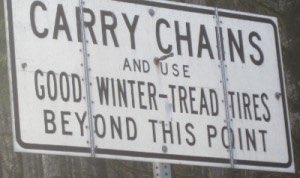 I love laughing at myself.
And I have certainly done enough things in my life worth laughing about. I could probably write a book about the whacky things that I have done – which may not be a bad idea at all.
The good thing about laughing at yourself (called self-effacing humour) is that the only person who could be upset by the story is YOU. There shouldn’t be any other collateral damage.
Having said that though, someone else could be upset, or offended, so you still need to think carefully, before opening your mouth.
Here is a story about Phil that will make you smile, and is one that has become almost folklore around the police station.
When I first came to Canada, I decided to drive from Vancouver to Banff. Having made that choice, it was fairly obvious to me after scrutinizing the available maps, that the Coquihalla Highway would be part of my journey.
Driving past the town of Hope, we passed a huge sign at the side of the road:
“CARRY CHAINS AND USE GOOD WINTER TREAD TIRES BEYOND THIS POINT”
I immediately obeyed, turning the car around at the first opportunity, and headed back to Hope, where in a local auto-accessory store, I bought myself a set of snow chains. I felt quite sensible after the purchase, acknowledging the fact that we were going to be driving over the summit of the highway at over 1,300 metres!
I threw the chains into the back of the little Nissan Micra, and headed back onto the highway.
This may be sounding perfectly normal to you perhaps until you find out that we were driving to Banff in July! There wouldn’t have been snow at 4,000 metres, let alone 1,300!
Now perhaps I was a little naïve about not needing snow chains in summer. The chap who sold them to me certainly didn’t give me any signs that I was nuts. He probably thought that I was just being prepared! Really prepared! In fact, I did actually use those snow chains once during the time that we owned the car…so they did eventually get put to good use.
In summertime, the drive over the Coquihalla Highway is nothing short of spectacular, with or without brand new snow chains in the trunk of your car.
I found the whole experience incredibly funny, and use it here to demonstrate how human we all are and how “life happens” to each of us.
I’ve mentioned the incident at work as well – which resulted in lots of smiles and chuckles – and that is a good thing. At the time when I share the story with others, I also give permission for them to use it back on me, which has been done many times.
But that is the difference. I shared it first with others, and so if someone else brings it up later as a ‘story’ about Phil, I have no reason to object to it being retold by others. As often happens when someone is re-telling a story, I’ve heard incredible variations of Phil’s ‘Snow Chains’ story over the years. Some of them have been worthy of movie scripts!
I love self-effacing humour.
It makes the person using it seem normal, and subject to all of those frailties that make us so human.
Someone that makes comments and ‘jokes’ about others (with no permission having being given for this to occur) is doing so at the expense of those people – not to honour themselves.
The more we hear people laughing at themselves, the more we are drawn to them. It’s about building relationships – positive ones that are built on friendship, community, and shared experiences.
Remember, if your own stories of being human put a smile on your face, then they will probably put a smile on someone else’s face too.
Remember, only laugh at yourself – not others.